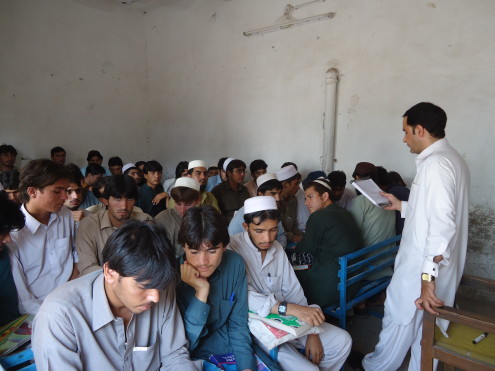 BANNU, September 11: An association of writers in Bannu, the Progressive Writers Union, inaugurated a free tuition centre in the name of Bacha Khan for the displaced students of North Waziristan.

Abdul Ghaffar Khan (1890-1988), alias Bacha Khan, was the leader of Khudai Khidmatgar Movement, also known as Red Shirts Movement and believed in non-violent opposition to the British rule in the Subcontinent.

More than 300 students of 9th, 10th, higher secondary classes have been enrolled at the tuition centre and they attend classes there from 2pm to 5pm.

Students being taught at the tuition centre told TNN, “We at educational institutions lack teachers, that’s why I would like all students of Mirali and Miranshah to come here and join this tuition centre, because teaching is better here compared to colleges.”

Head of Bacha Khan Tuition Centre, Professor Ishaq Wazir, said that no government or private organisations have provided them any assistance in this regard.