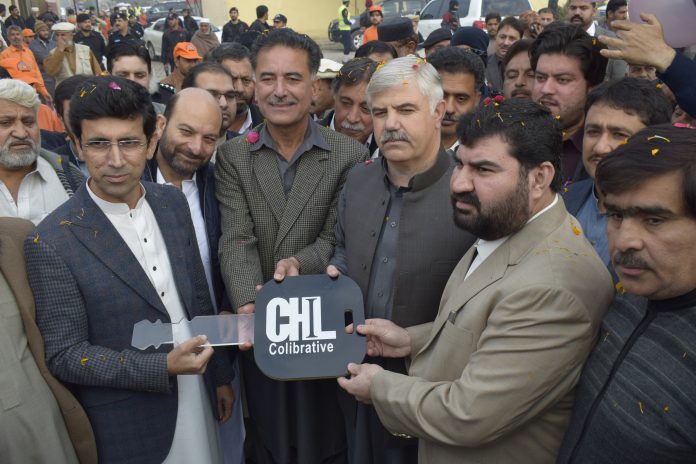 Chief Minister Mahmood Khan handed over the vehicles and machinery during a ceremony organized by WSSP.

The vehicles and machinery were distributed among four zones of WSSP.

He said the new vehicles and machinery would improve service delivery and enable WSSP to lift solid waste from congested localities of Peshawar city.

He said government’s foremost priority was clean and green Khyber Pakhtunkhwa and Peshawar, for which all available resources were being utilized to achieve this objective. He expressed satisfaction over the services of WSSP and asked CEO Khanzeb Khan to left no stone unturned to keep Peshawar clean.

The chief minister said that other water and sanitation companies would be equipped to make Clean Green Pakistan initiative successful.

Briefing the chief minister, CEO Khanzeb Khan said that the rickshaw dumpers would access the congested walled city making it easier for sanitation staff to collect more waste in comparatively less time which would ultimately leads to better citizens satisfaction in terms of water and sanitation services provision.

“WSSP is providing sanitation services ‘under one roof’ that is speedy as well as cost-effective,” the CEO said.

Engr Khanzeb Khan added that WSSP is the only sanitation provider that has its own landfill site and modern machinery.

“This is because of our commitment and improve service delivery that international organizations are willing to work with us in fields of water and sanitation,” he added.

He said that unicef and Swiss Development Corporation has been working with WSSP in Water Sanitation and Hygine (WASH) sector aiming to provide quality sanitation services to the people.

He informed that WSSP has become the only sanitation utility to introduce Rickshaw dumpers which are especially designed to pick solid waste from narrow streets and transfer it to the designated collection points.