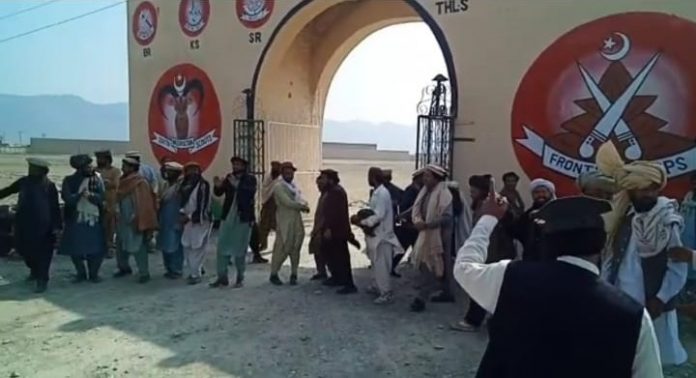 WANA: The ‘Yao Wazir’ sit-in by the people of South Waziristan tribal district for acceptance of their demands in Wana entered 10th day on Saturday.

The sit-in has been staged by the people of South Waziristan affected from militancy and military operations outside the Frontier Corps (FC) Camp in Wana. A large number of tribal elders and political activists have joined the sit-in titled ‘Yao Wazir’ which means the Wazir tribesmen are united for their rights.

Participants of the Friday’s demanded the government to accept their 15-point charter of demands without further delay. The main demands include compensation for damages during militancy and military operations, restoration of peace, shifting of all administrative offices from Tank to South Waziristan and facilities for Afghan refugees and affectees of Utmanzai Wazir tribe at check posts. One of the demands is about ownership rights of the local people on forests, while demands have also been made about recovery of Dr Noor Hanan and Dr Abidullah Mehsud, provision of internet facilities, opening of Angoor Adda border, steps for curbing the increasing use of narcotics in the area, audit of funds provided to merged districts for affected people by government and non-governmental organisations since the war on terror began in 2000, inclusion of Madrassas (religious seminaries) in development process, restoration of educational institutions and health centres and resolution of all land disputes according to official record.

Participants of the rally said they will continue protest till resolution of all demands.

Yao Wazir sit-in is apparently inspired from the similar protest of Mehsud tribesmen in Tank. People from Mehsud are also staging a sit-in in Tank to lodge peaceful protest over non-payment of compensation to people who were affected from militancy and military operations. The sit-in was titled ‘Yao Maseed’ which means ‘One Mehsud tribe’.