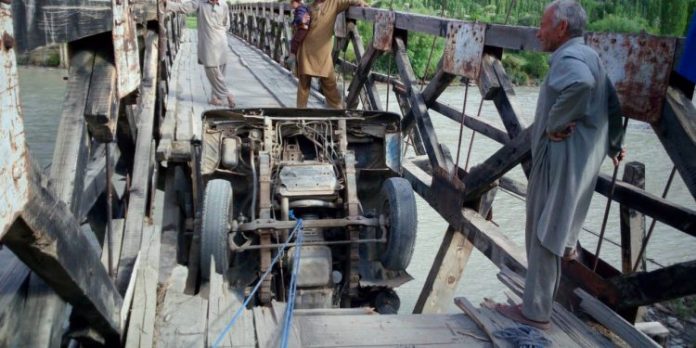 CHITRAL: The bridge on river in Yarkhun area of Upper Chitral has been broken due to the area having population of 10,000 has been disconnected with the rest of the district.

Local sources said a van loaded with cement was passing over Yarkhun bridge when the bridge broke due to overloading and the van fell below the bridge. The van was badly damaged in the mishap, while driver sustained serious injuries.

Due to breakage of the bridge, the link between an area having a population of 10,000 has been cut off with rest of the district has been broken. Yarkhun bridge connects Phashk, Miragram No.2, Pardan, Deoser, Wasom and other villages to the main road.

Local councillor Syed Qasim Shah, social activist Babaruddin, Kisan councillor Rehmat Khan and other local residents said while talking to TNN that it was the only contact bridge in the area. They said after damage to the bridge, the area people are facing many difficulties as they cannot reach their educational institutions, workplaces and other areas of the district where they intend to go for various tasks. They said 10,000 people will also face shortage if the problem of the bridge was not resolved immediately.