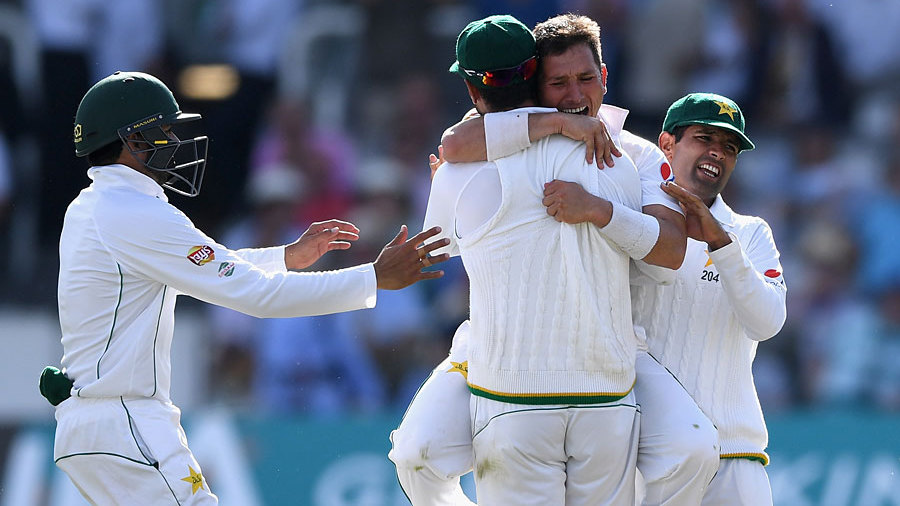 PESHAWAR, 17 July: Pakistan registered a historic 75-run victory over England on the fourth day of the Lord’s Test by dismissing the host side for just 207 runs in their second innings taking 1-0 lead in the four-match series.  This is Pakistan’s first win at Lord’s after a gap of two decades.

The Swabi-born leg spinner Yasir Shah was the pick of the match for Pakistan as he completed his first 10-wicket haul in Test cricket.

Earlier, Pakistan set a target of 283 runs as they were dismissed for 215 in their second inning within 10 minutes of the four-day’s morning session thanks to some brilliant bowling from English al-rounder CR Woakes.

Asad Shafiq (49) was Pakistan top scorer in the second inning followed by wicketkeeper Sarfraz Ahmed (45) as the two lifted Pakistan following the collapse of the top order.

When England started their chase of 283, they lost three quick wickets before the lunch. The foundation was provided by pacer Rahat Ali, which was further augmented by some magic from Yasir Shah as the English batsmen struggled to build partnerships.

Pakistani skipper, Misbah-ul-Haq had decided to bat first after winning the toss on the first day of the Test. Pakistan scored 339 runs in the 1st innings with captain Misbah (114) remained the top-scorer of the innings.

The England side was restricted to 272 runs in the first innings conceding a deficit of 67 runs. Yasir Shah registered his name in the honor book for getting six English batsmen in the inning.

The second Test match of the series will be played on July 22, at Old Trafford, Manchester.