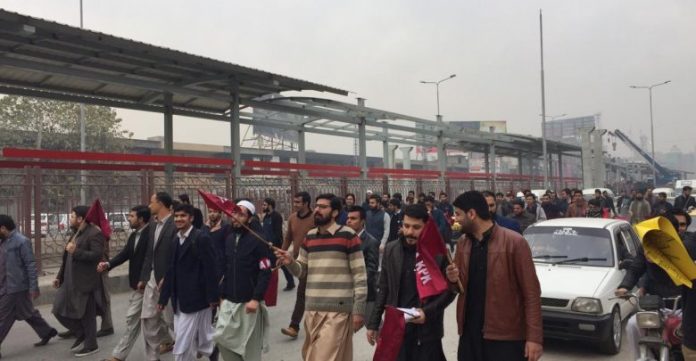 PESHAWAR: Young doctors from all the hospitals of the provincial capital on Thursday protested and closed the grant trunk road for their demands, which include the release of salaries, security at work and permanent jobs to all the newly FCPS passed doctors.

The doctors, who later moved to the civil secretariat for a sit-in, have closed the road putting the traffic on GT in a great mess. The doctors demanded that for the last six month, the salaries of 600 young doctors have not been paid by the government of Khyber Pakhtunkhwa (KP). They said that the salaries have been held without any solid reasons and asked the released their salaries otherwise they will further extend their strike to other parts of the province.

The second demand of the protesting doctors is that during the last year, a total of 1100 doctors have passed the FCPS examination but the KP government has so far provided jobs only to 400 doctors in different hospitals of the province. The doctors said that there are seats available and more doctors are needed in all the major hospitals but the government is reluctant in hiring new doctors. “It is not acceptable to us. The government has to provide seats to all the FSPS exam passing doctors,” said Dr Sohail who is the leading the young doctors.

Another demand of the young doctors was to provide security to on-duty doctors. Citing a study, the doctors said that during 2018, 1800 doctors were attacked and subjected to torture during their duties in KP but no arrangement for their security have been provided against such attacks. “There is a need of a law to protect on-duty doctors against the violence,” said Dr Sohail. “There has also been some work done on it but it has not been given a practical shape.”

Dr Sohail told The TNN that they have put all their demands before the provincial health minister, but the government is not serious in providing a solution. Sohail claimed that their protest is peaceful and it is going on for the last two months in the hospitals. He added that even today, though they have arranged a sit-in outside civil secretariat, they are providing medical services to patients in all hospitals. The doctor warned that the protest will continue till the government gives written assurance that all demands will be solved on priority bases.