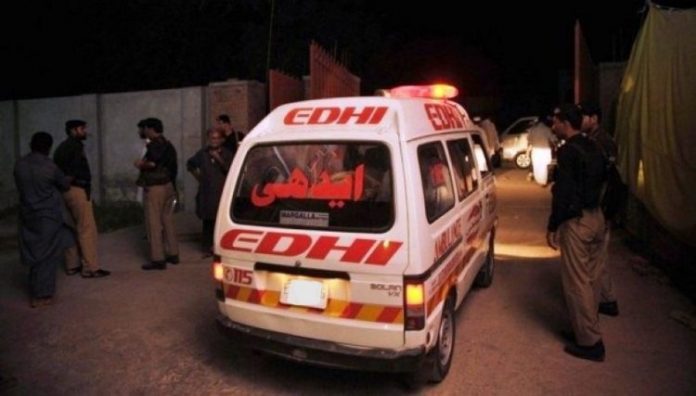 PESHAWAR: A young man was killed in the name of honour while a woman managed to escape and save her life in Peshawar on Saturday.

Officials at Inqilab Police Station said Sarbaz Khan filed a report in which he alleged that Ihsanullah and Kamran, who belong to Afghanistan, have killed his son Tariq in the name of honour. He said the assailants escaped after killing his son.

Police said the alleged killers have been arrested after filing of the report. They said it was revealed after initial investigation that Ihsanullah’s wife had gone to her parents’ home in Panj Khatta area. When Ihsanullah went to the house of his in-laws to bring back his life, he saw her in compromising position with her alleged paramour, Tariq. Police said the enraged Ihsanullah opened fire due to which Tariq died on the spot. However, Ihsanullah’s wife managed to save her life and escaped unhurt.

The body of Tariq was handed over to his family after post mortem. A case of the incident has been filed and the accused Ihsanullah has been arrested. Further investigation into the case is underway.

In a separate incident in Peshawar, a hand grenade was thrown on the showroom of a car dealer on the Ring Road on Saturday night. The car showroom was owned by a Pakistan Tehreek-e-Insaf (PTI) leader Zubair Afridi. No casualty was reported in the attack as no one was present there. Police arrived at the site of the blast and started investigation.

A man shot dead his rival over old enmity near Sikandari Stop in Mardan on Saturday and also killed a traffic police personnel when he tried to stop him.

TNN correspondent said an armed man opened fire on 18-year-old Mudasir due to which he was killed on the spot. As the assailant was trying to escape, a traffic police personnel, Attaullah tried to get hold of him, but the armed man also opened fire on him leaving him critically injured.

The injured traffic policeman was taken to Mardan Medical Complex from where he was shifted to Lady Reading Hospital Peshawar due to his critical condition. Attaullah died during treatment at the LHR on Sunday.

Police said a case of the incident has been filed and the culprit will be arrested soon.