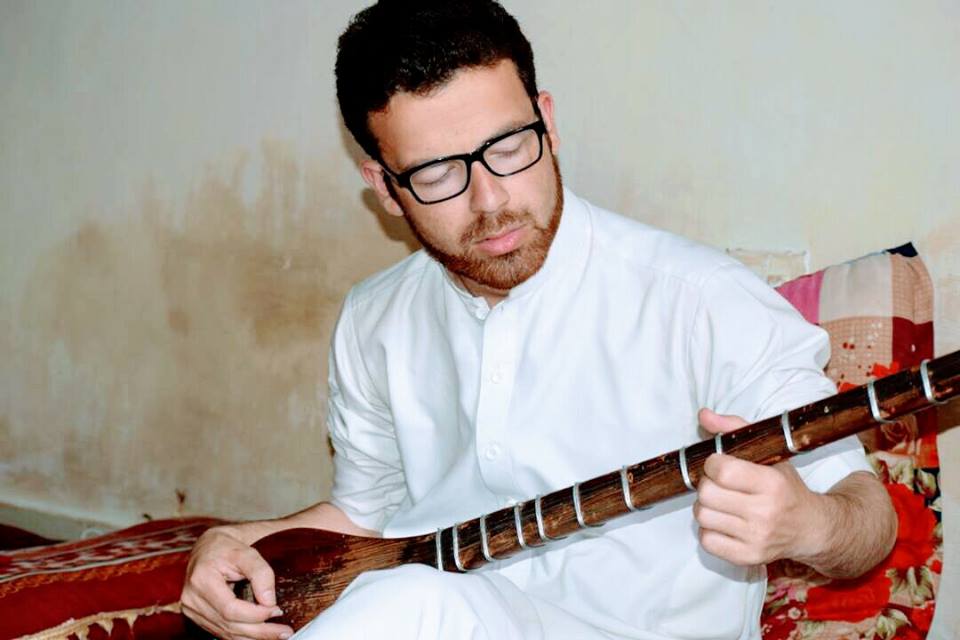 “If music be the food of love, play on,” how beautifully William Shakespeare described it. Not many musicians have a story, this one is a story of friendship between a 24-year-old boy with his ever-loving sitar.

Mian Safeer, the young sitar player gives a message of peace and love to people of militancy-hit Pakhtun belt through his tunes.

24-year-old Safeer is a student of law at Islamia College University Peshawar and has a passion for sitar. It took him years to show his skills with strings on sitar and he found the instrument that spoke to his soul and he was born to play it.

His passion for the sitar began at a very young age. He said he gives a message of peace through his music to the young generation of Khyber Pakhtunkhwa.

When asked about his relationship with the art, he said “Music is symbol of peace and love and I would advise Pakhtun youth to divert their attentions towards books and sitar instead of guns,” he said, while talking to Tribal News Network.

Hailing from a conservative area in Shangla district of Khyber Pakhtunkhwa, he faced criticism from elders, relatives and friends but he continued to pursue his passion against all odds and he developed an ear for his community at a very tender age.

It is because of his father’s support that he never pays heed to people criticism. Now the hard days are over and everyone in his village wants him play sitar.

It took him years to master his skills and now he can play the instrument with sensitivity and scrupulous and renders the most complicated of compositions.

“I know I have the art of dwelling the audience in recollections and reminiscences, and I believe the tunes of rich melodies will help spread love and peace”, said Safeer.

“I even kept my passion alive and would play sitar at a time when owning musical instruments could cost you your life in Khyber Pakhtunkhwa,” he said in reference to militancy that prevailed throughout Pashtun belt.

Safeer commands a clear, fluid sweetness in his sitar playing, combined with sensitivity and scrupulous, leaving his friends in awe. Hamid Afridi, an old friend of Safeer described his music as the best in town.

A concert-goer boy Adam who listened to his melodies for the first time stated that “I felt like he was expressing gratitude through his music, it was so real,”said Adam.

Safeer says educated and young musicians are joining the Pashtu music industry that has been suffering from stagnation since last several years. “Now we are out of that dark periods, winds of peace are blowing in every direction and I want our youth to prefer education and music over guns,” Safeer urged Pakhtun youth.

He said this was a simple musical instrument that can be played with ‘mangi’ (drum) and give a melodious sound.Safeer is known for his deep grasp of intricate rhythmic cycles of Pushto/Urdu classical music.

Giving a message to youth, he said he daily play sitar for one or two hours and spent most of time in reading and studying.