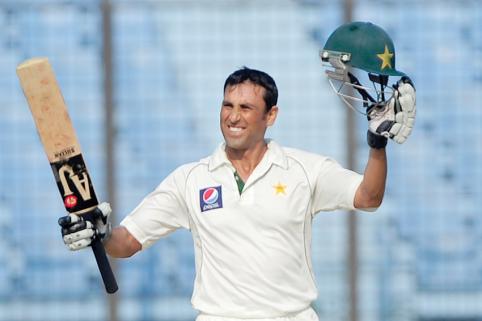 “Younis Khan has moved up three places to second position in the latest ICC Player Rankings for Test Batsmen following his side’s 133 runs victory over the West Indies in Abu Dhabi on Tuesday,” said the ICC statement.

Younis Khan had missed the opening day-night Test match in Dubai as he was advised by the doctors to take rest following his hospitalization due to dengue fever.

The senior batsman had claimed the number one ranking back in March 2009, following his triple century against Sri Lanka. Australia’s Steve Smith is at number-one spot with 46 points ahead of Younis.

Captain Misbah-ul-Haq also jointed the elite club of top-ten batsmen by moving one step up 10th position after scoring 96 in his only innings of the second Test. Asad Shafiq has also risen to 14th in the rankings, up two spots, following his two half-centuries.

In bowling, Pakistan leg spin star Yasir Shah has also moved one position up to number-four after his 10-wicket haul in the Abdu Dhabi Test.