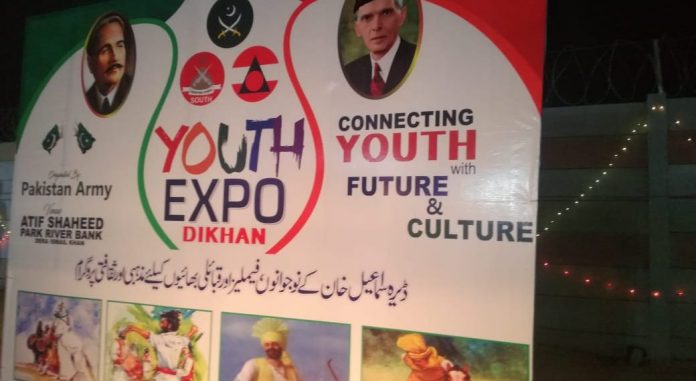 The traditional Pashto dance Atten, Baloch dance, debate competition and Naat Khwani contests were held on the occasion, while the youth also displayed the martial art skills which were greatly appreciated by the participants. An expo of local music was also presented on the occasion which was enjoyed by the people at the expo.

Different stalls were installed during the expo in which the visitors took keen interest. Especially, the stalls of food, clothes and decoration pieces attracted a lot of visitors.

The IGFC said on the occasion that such expo will also be arranged in South Waziristan tribal district to provide entertainment and recreational environment to the area people, particularly the families that want to come for an outing.

Deputy Commissioner Muhammad Umair said these programmes are very important for the youth. He said the youth should be provided such facilities to bring them towards positive activities.

Programme Organiser Rehana Yasmeen said while talking to TNN that the purpose of organising the expo was to bring the youth together and give a message of unity. She said there is no Punjabi, Sindhi, Pathan or Balochi among us, and we all are Pakistanis. Rehana Yasmeen said the organisers gave more opportunity and exposure to the youth of South Waziristan at the expo to show their talent. She said the Waziristan youth after exposure will be able to arrange such programmes in their own areas. She said the people of South Waziristan also deserve good entertainment opportunities.

The visitors at the expo said such programmes must or organised in the area on a regular basis to provide entertainment to families and give chance to local youth to show their talent.

At the conclusion of the expo, trophies and prizes were distributed among the players who showed good performance.