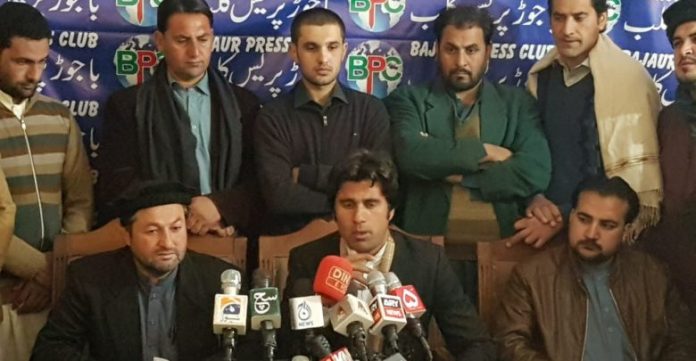 BAJAUR: The Tribal Youth Forum (TYF) on Friday has flayed Governor Shah Farman for his alleged interference in the affairs of tribal districts. The youth said that under the law, he is no more entitled to the power and authority; he has exercised over the tribal areas before its merger with Khyber Pakhtunkhwa.

After the passage of 25th amendment to the constitution of Pakistan that abolished article 247 and the tribal areas become the part of KP, the governor, who is the representative of the federal government, also lost all his power and authority over these districts.  Now, the Chief Minister, being the Chief executive of the province, has the responsibility to run the affairs of tribal districts.

While addressing a conference at Bajaur press club on Friday, Chairman of the Tribal Youth Forum, Rehan Zeb said that the youth of tribal districts will no more allow the governor to exercise authority over their areas.  They also alleged differences between the governor and Chief Minister over the affairs of tribal districts which they fear will negatively affect the reforms process in the new districts.

The Youth also strongly criticized the Pakistan Tehrik-e-Insaf (PTI) government saying they have claimed that all the difficulties faced by tribal people will be resolved after they come into power. However, they expressed, several months have passed but only promises and announcements were made with tribal people and no practical steps have taken to alleviate the hardships faced by them.

The youth also asked the federal and KP government to ensure the share of tribal districts in the National Finance Commission (NFC) award. Otherwise, they warned of protests in the federal capital to secure their rights. The Youth also demanded the federal and Sindh government investigate the murders of three Bajaur labourers in Larkana district and give exemplary punishment to the culprits.