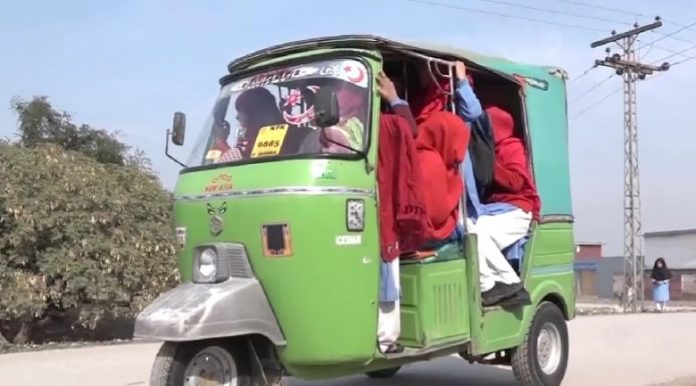 PESHAWAR: A youth in Peshawar has taken responsibility of picking and dropping dozens of those girls students whose parents cannot afford transport facility for them due to poverty.

Rickshaw driver Arab Shah says his elder sisters remained deprived of education as his parents could not afford transport fee, so he has decided now to contribute to the education of other little girls who dream of a bright future through getting education.

“I have six sisters and five brothers. All sisters are older in age than me and they used to cry at home demanding parents to send them home, but our parents were poor and could not afford transport charges. I was also very young at that time and could not do anything,” Arab Shah said while talking to TNN.

The 31-year-old social worker said he picks and drops primary and middle female students of his area and then also takes them to madrassa and brings them back in the evening. He is doing all this for the last seven years without charging any fee. He said he picks and drops about a hundred female students with an aim to promote female education. He uses his rickshaw for his own business in the time between the school and madrassa opening and closure.

Arab Shah said he drives rickshaw for about 17 hours daily and he doesn’t contribute to household expenses as this responsibility is fulfilled by his elder brother who is a truck driver. He says he uses his earning just for personal expenditure and social work. He said parents of students now him well and they trust him.

Arab Shah said he was previously driving a rented rickshaw, but then a local person who is in US for work bought him a rickshaw for social work. He said he no longer needs to pay for rented rickshaw and using the gifted rickshaw from the overseas Pakistani for social work and personal use as well, and he has earned great respect in the entire area. He said certain vendors in the village often don’t charge anything from him and give him free items in recognition for his services for the village.

Arab Shah said he has not entered marriage yet because he thinks that after marriage he would not be able to dedicate time and resources for his mission. He said the government or any private institution has not provided him any help. He said his efforts were conveyed to Nobel Laureate Malala Yousafzai who then provided a van which is being driven by another driver who provides free of cost pick and drop to high and higher secondary schools girls students.