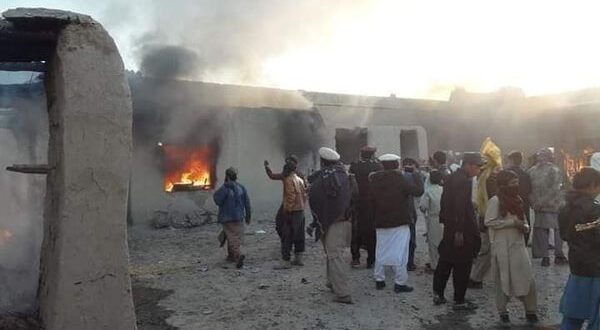 WANA: A qaumi lashkar (group of volunteers) of Zalikhel tribe on Tuesday demolished and set on fire two houses in Azam Warsak area of Wana, the main town of South Waziristan tribal district.

Sources said about 4,000 volunteers of Zalikhel tribe participated in the mob attack on the houses. The personnel of police and district administration were seen helpless before such a large militia and they had to leave the scene eventually.

The lashkar members demolished the house of Khan Badshah Sarkikhel in the presence of Deputy Superintendent of Police (DSP) Inam Gandapur and Assistant Commissioner Wana.

Khan Badshah has alleged that his house was razed with the consent of police and district administration. He said cash, jewellery, solar panels, cattle and other precious equipment in his house was also reduced to ashes in the mob attack and he suffered losses of millions of rupees.

DSP Inam Gandapur said that even after merger of erstwhile Fata with Khyber Pakhtunkhwa and extension of police system to merged districts, the Zalikhel tribe has taken law into own hands which means it is challenging the writ of the government. He said a first information report (FIR) has been lodged against 25 elders of the tribe and further action is being carried out.

Meanwhile, the house of Lashta Khan was also demolished by the militia of volunteers. Social circles criticised the inaction of the district administration and police over violation of law. They say that after extension of police system in merged districts, the parties to conflict or any other issue must adopt a legal course through police and judicial system. However, they say, the open violation of law and mob action reveal the government is yet to enforce its writ in the merged districts and ensure rule of law.