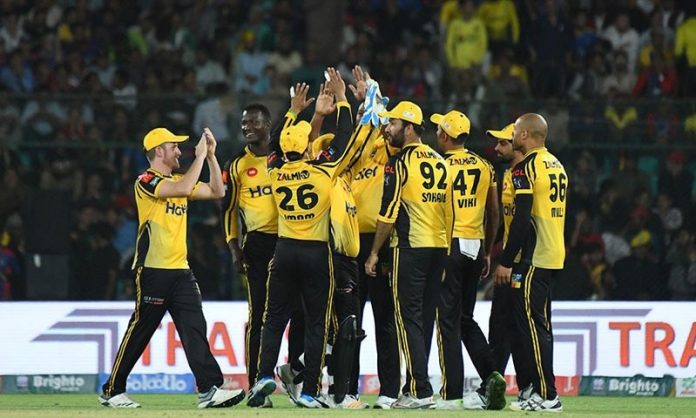 PESHAWAR: Peshawar Zalmi topped the points table after an easy victory against Karachi Kings in the last match of the PSL before playoffs in Karachi on Monday, while in an earlier match Lahore Qalandars again ended at the bottom of the table after a crushing defeat from Multan Sultans.

Zalmi after being put into bat first scored 203 runs for the loss of seven wickets. Kamran Akmal was top scorer for Zalmi with 86 runs, while Imam-ul-Haq scored 59. For Kings, Mohammad Amir took three wickets, Munro took two wickets and Usman Shinwari got one.

Kings were never comfortable in the chase and were out for 142 in 17th over. Ingram batted well for 71 and captain Imad Wasim also scored 30, but no other batsman could bat well. Resultantly, Zalmi won by 61 runs and booked top place on the points table, while Kings finished fourth.

Kamran Akmal was declared player of the match.

In an earlier match, the embarrassment for Lahore Qalandars continued as they lost to Multan Sultans by seven wickets and ended at the bottom of the points table for the fourth consecutive season.

Sultans invited Qalandars to bat first and restricted then to 148 for the loss of eight wickets. Captain Fakhar Zaman was top scorer with 53 and Wiese scored 30. For Sultans, Mohammad Abbas took three wickets, Shahid Afridi took two wickets, while Green and Mohammad Ilyas took one wicket each.

Sultans surpassed the target with ease in 13th over with the loss of three wickets. Shan Masood scored 48 runs, while Charles scored 41. For Qalandars Shaheen Shah Afridi and Wiese took one wicket each.

Mohammad Abbas was declared player of the match.