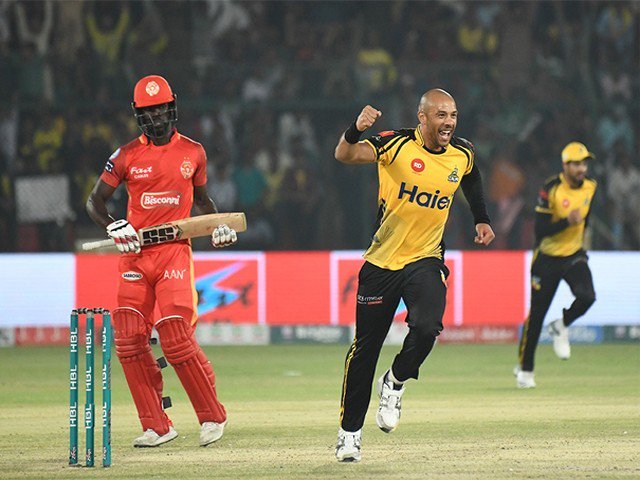 PESHAWAR: Peshawar Zalmi moved into the final of the fourth edition of the Pakistan Super League (PSL) by defeating two-time champions Islamabad United by 48runs at the National Cricket Stadium Karachi on Friday.

Islamabad United won the toss and invited Peshawar Zalmi to bat first in good batting conditions. Zalmi were off to a flying start as their openers dominated the game and helped them to a massive total of 214 for the loss of five wickets. Kamran Akmal continued his good form and scored 74 runs, Imamul Haq scored 58 and Pollard and Captain Darren Sammy also contributed with 37 and 30 respectively.

The bowling figures for Islamabad United were not very impressive as all their bowlers conceded plenty of runs. Delport took two wickets, while Shadab Khan took one wicket.

Islamabad United were in disarray as they started chasing the massive target and regularly lost wickets. They eventually fell 48 runs short and ended on 166 for the loss of nine wickets. Walton was top scorer with 48 runs, Faheem Ashraf scored 31, Delport scored 28, while Hussain Talat scored 19. The big hitting batsmen Ronchi and Asif Ali failed to lift United in Friday’s game as they were out for 17 and zero respectively.

For Zalmi, Chris Jordan and Hasan Ali took three wickets each, while Mills, Wahab Riaz and Pollard took one wicket each. The pace battery of Zalmi was very effective on Saturday as they bowled very well and did not allow Zalmi batsmen to bat freely.

Kamran Akmal was declared player of the match for his brilliant batting.

The stadium was full to the capacity and the disciplined crown cheered both the teams and enjoyed the match.

The final of the mega event will be played between Peshawar Zalmi and Quetta Gladiators tomorrow (Sunday).

Zalmi were the runners-up in the last edition of the PSL as they had lost to Islamabad United in the final, while Gladiators will be playing their third final. Gladiators will be hoping to win their first title in tomorrow’s game. However, they will face a big challenge from Zalmi who are just getting better and better as the mega event has moved to its final match.