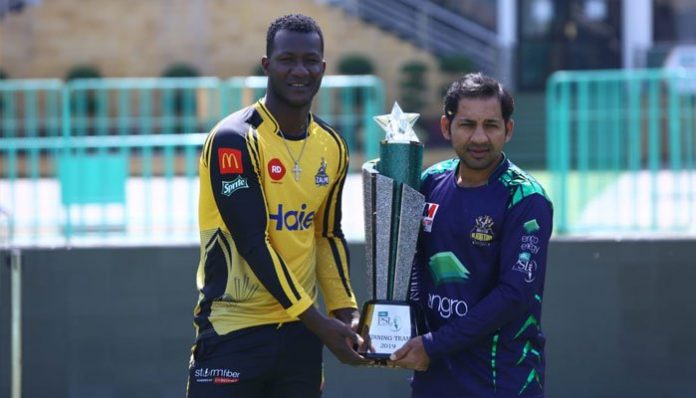 PESHAWAR: All eyes are set on the final of the fourth edition of the Pakistan Super League (PSL) which will be played between three times finalists Quetta Gladiators and one-time winners and finalists of last edition Peshawar Zalmi today (Sunday).

Preparations for the mega event have been finalised at the National Cricket Stadium Karachi where all the tickets have been sold out. The match will begin at 8:00pm (PST). Before that a colourful closing ceremony will be held at the stadiums in which important figures and celebrities are expected to show up.

Last time when the Zalmi and Gladiators clashed in final of the PSL in 2017 in Lahore, Zalmi emerged victorious. However, at that time the main foreign players of Gladiators were did not come to Pakistan which hurt their team. However, the situation is different this time as Shane Watson, Rilee Rossouw and Fawad Ahmed are already in Karachi and are winning the hearts of spectators with their brilliant performances. Unfortunately for Gladiators Fawad Ahmed may miss the game as he sustained a severe injury during the last match against Zalmi in which he was hit in the mouth with a ball firmly hit by Imam-ul-Haq.

In the fourth edition of PSL which has now reached its final stage, both the teams clashed thrice and Gladiators won all the games. But Zalmi Captain Darren Sammy is unfazed by these figures and says every match is a new match and with the momentum Zalmi have they can beat any team. He expects a tough final contest and hopes that the spectators will enjoy it thoroughly.